How important is keeping your promise? On a scale of one to ten, where would you place the importance of keeping your word? I would venture to say that It’s not meaningless (1) but is it a consistent 10?

A lot of things are easier said than done, or we wouldn’t be urged to “count the cost in advance.”

please note that I did receive a copy of this book for free from Celebrate Lit, but I was not required to leave a positive review. Also, some links may be affiliate links, for your convenience. You may view my full disclosure here.

You may also enjoy The Trouble with Nancy, a Pony Express suspense! 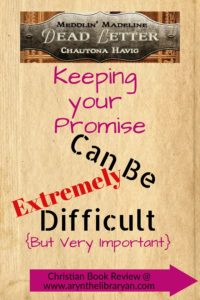 Why Is It Important to keep promises?

Keeping a promise when it is inconvenient or uncomfortable is a sign of integrity and character. It means putting one another ahead of self.

Keeping your promise shows that you value the other person.

Think wedding vows, job description, telling your kid you will change the batteries in that toy later TODAY…

“do unto others as you would have them do unto you.”

How do YOU want to be treated?

Keeping a promise costs something. Be careful what you agree to, and be diligent about keeping your promise.

Man, I’m feeling totally convicted here, and I haven’t even gone to look up the scriptures I want to include next!

I see a trail of good intentions and lackluster follow-through, especially directed at my oldest, and honestly, with my husband.

I tell my son we can do ______, after _____. Then I forget and move on with whatever chore or personal desire comes next. Keeping a promise to him should be more consistent. Instead of disappointment, I could be trustworthy. 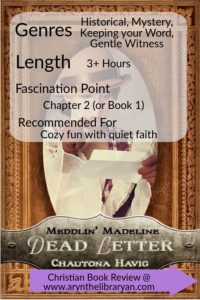 Bible Verses About Keeping Promises to Others

Numbers 30 goes in-depth on keeping your promise [And on a father/husband’s role as well, very interesting and reassuring!].

In which case, keeping your promise becomes the wrong thing to do.

Another one of the great Bible verses about keeping promises to each other is found in James 5:12 NASB. James is quoting Jesus, and Numbers, and is firm. Keeping your promise is critical.

But above all, my brethren, do not swear, either by heaven or by earth or with any other oath; but your yes is to be yes, and your no, no, so that you may not fall under judgment.

The Importance of Keeping Your Word

Well, if there’s any doubt remaining on the importance of keeping your word, how about the nasty feeling you get when you realize you failed someone important to you?

And then, there are situations like Madeline encounters below, where keeping your promise (s) will hurt someone you love. And you knew that when you made the promise.

But counting the cost, you make the promise anyway, and now you have to go on, keeping your promise and following through.

Dead Letter: Keeping Your Promise at All Costs

Okay, so the bank mystery is fun, and the persona Madeline claims for her disguise in book 4 is funny. The letters to and from “Royal” (the Pinkertons, or an imaginary fiance) are hysterical. Over all, I would give Dead Letter 5 Stars.

But, what kept pulling me deeper was Russell’s family. If you recall from book 3, Fine Print, Russell is my favorite.  When his mom makes Madeline promise to remain undercover instead of returning to comfort the grieving, well … I knew it would be hard.

Keeping a promise like that? When your heart and head are both screaming at you, and you can see the suffering that will occur if you keep your promise, and the disaster that is likely if you DON’T keep your promise? The proverbial ‘rock and a hard place’ situation!

Madeline’s turmoil and the grace with which she pulls off the situation are equally encouraging. I appreciate the reminder that inner distress and upheaval are ok, and you can still do what is right, even if it’s hard.

Russell doesn’t have enough information to understand, and his pain comes out as anger, a fairly normal response, considering!

The lessons on prayer are great as well! (neatly woven in, and encouraging) There is a very good explanation of “why pray when God already knows everything?” among other things.

An excellent read, fun, mystery, sadness, adventure, and some Meddlin’ of course!

About the Book: Dead Letter 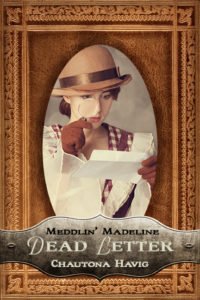 For the first time, Madeline has permission to meddle.

Sent by the Rockland Pinkerton’s office to investigate shady banking practices, Madeline finally has the opportunity to try out all her developing detective skills. From her new disguise to an assumed persona, complete with non-existent fiance, Madeline takes on embezzlement in Wintherwood, Ohio.

Now, to find the culprit and get back to Rockland before Amy arrives, before Mrs. Barnes gets any sicker, and before Russell writes her off as a hopeless, heartless girl.

As Madeline figures out what’s happening, even Mr. Flint begins to lose confidence in her. How will she prove who is taking the money and why–especially after her primary suspect ends up dead? 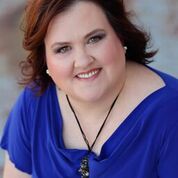 Chautona Havig lives in an oxymoron, escapes into imaginary worlds that look startlingly similar to ours and writes the stories that emerge. An irrepressible optimist, Chautona sees everything through a kaleidoscope of It’s a Wonderful Life sprinkled with fairy tales. Find her on the web and say howdy—if you can remember how to spell her name.

3 REASONS YOU’LL LOVE THE BOOK AND HATE ME
“This is book four, right?”

He looked at me with those eyes that conjure up the idea of puppy dogs begging for treats. So deceptive. “You’re going to have to up the stakes then.”

“Well, this is the one where she goes into official active detective mode and decides if she even wants that kind of life.”

He was right and I knew it. Fortunately, I’d prepared for this moment. You see, I know him well. He’s a horror writer. He likes to torment in ways that make my worst meannesses seem petty (like the time I suggested killing off Chad in Past Forward—trust me. That was kind compared to his ideas).

So, I pulled out my bigger gun and plopped it on the table. I added ammunition. And grinned.

Look, you guys are going to hate me for it, but trust me. It needs to be done. You’ll forgive me… eventually. Maybe. I hope.

The work began. He suggested one thing. I toned it back. He looked like that puppy again—except this time I’d kicked him. Bless his heart, he does love his horror.

Still, he whistled his way out the door a short while later, and I grinned. Compromise is beautiful. But what does that mean for YOU?

3 REASONS YOU’LL LOVE THE BOOK AND HATE ME

Love the book: Madeline as Jane Sempleton is a hoot. She cracked me up from the beginning, and I’m still chuckling.

Hate me: Madeline’s faith and integrity are tested in this one—exponentially. Without giving away too much, her father even rebukes her!!!

Love the book: Mrs. Barnes is such a sweet mentor to Madeline

Love the book: Snippets of the heart get revealed.

So, there you have it. All the reasons you should read this book… and remember that the series isn’t over. Not by a long shot. It’s darkest before dawn. And um… a whole bunch of other clichés. 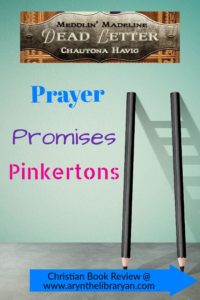 Among the Reads, March 18

Through the Fire Blogs, March 23

For Him and My Family, March 24

To celebrate her tour, Chautona is giving away a grand prize of a paperback copy of Dead Letter, a Madeline-inspired book cozy, and a book-themed candle!!

Be sure to comment on the blog stops for nine extra entries! Click the link here to enter.

35 Comments on “Keeping Your Promise When It’s Hard”