This “Revolutionary” Celebrate Lit Book Review is one of my favorites to date! And not just because the Author is a Floridian!!

*note I did receive a free copy of this book, though all opinions are my own. There are also some affiliate links for your convenience. You can see my full disclosure here.

Freedom costs more than Portia wants to pay, but revolutions run on sacrifice … and blood.

Three months a satellite prisoner, Portia wonders if the Brotherhood has left her to die—until she plunges into the domain of an underground smuggler contacted by her brother. But her rescue comes with a price tag only she can pay, and now, she must forfeit her identity to act as a spy back in the dizzying politics of Crystal. There, she learns that her enemies want the Dome to approve mass satellite executions. No one knows why. Worse, they’re using her friend Luther, now a Court Citizen intern, to sign the short-term orders. She desperately wants to confide in Luther, but can she still trust him with the company he keeps?

Plagued by shadows and guilt for leaving her protector Gath behind on the satellite, Portia must find a way not only to rescue him and the other prisoners, but also to destroy the slave camps once and for all.

My Thoughts on The Revolutionary

While it’s not a stand-alone, being the second in a tightly connected trilogy, The Revolutionary is a powerful story.
Hope. Trust. Identity. Freedom!
These elements are present and well thought out. 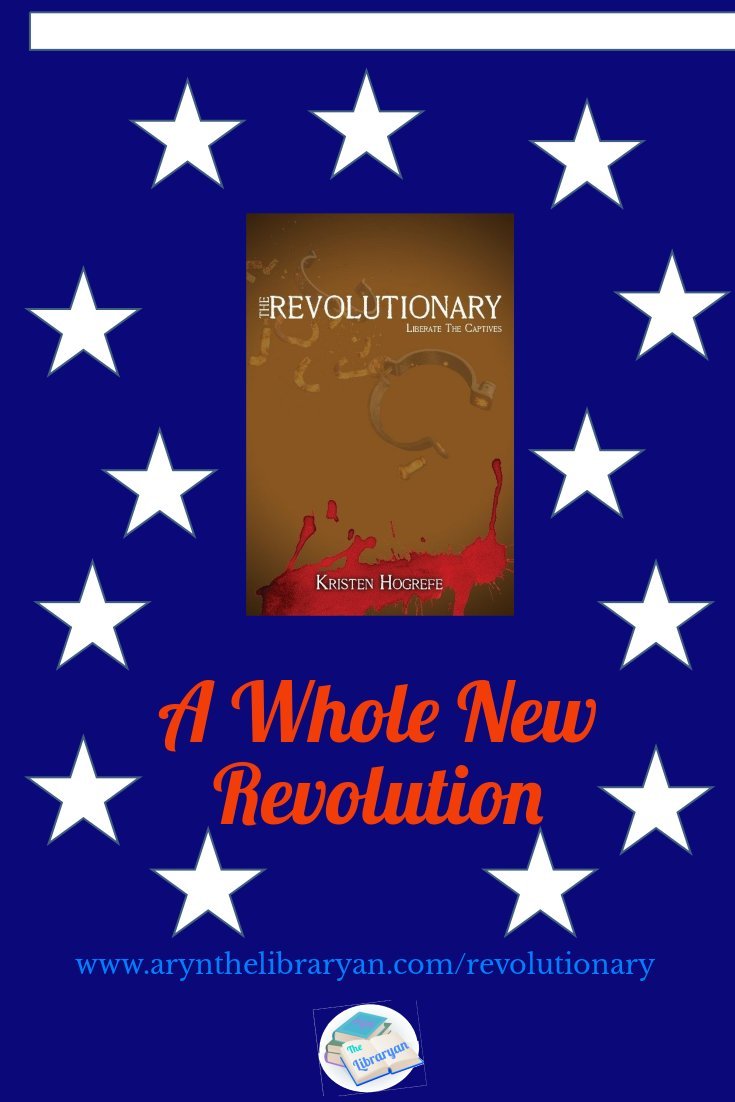 Here in the second book, Portia finds a Bible! (Banned for 60 years) She looks up a few of the passages heard in her encounters with the Founding Fathers. Only a few slivers stick in her mind, but they end up coming back to the surface when she needs them, as God has promised.
In a way, this series reminds me of the book of Esther. There is little to no reference to God, but He’s there just the same.
I would recommend this book to anyone who likes mysteries, history, or future realities. If you question where we are headed as a nation and as a world, give it a try! (And if you’re interested in my thoughts on book 1, then click here.)

Kristen Hogrefe is a multi-published novelist and teacher who challenges young adults and the young at heart to think truthfully and live daringly.

Her publishing journey began in 2010 with the first book in her young adult (YA) suspense trilogy Wings of the Dawn. She completed the trilogy in the fall of 2014, and in 2016, contracted with Write Integrity Press for a new YA dystopian trilogy: The Rogues.

Kristen also has the heart of an educator and mentor. She teaches secondary language arts for Alpha Omega Academy and served in youth ministry for many years. Through Word Weavers International, she encourages aspiring writers and acts as president for an online writing group. She enjoys speaking events that allow her to connect with readers and other writers.

A lifelong Florida resident, Kristen loves adventuring outdoors and running with friends. Connect with her online at KristenHogrefe.com.

Identity, Coffee, and a Sprinkle of History in The Revolutionary

The Revolutionary begins three months after Portia arrived at a satellite prison camp. She feels forgotten by her brother and friends who promised to rescue her. Deeper than the physical pain of starvation, she battles the emotional rawness from the dehumanization of her identity. A number replaces her name, and the Wasps who mistreat prisoners mockingly call them “rabbits.”

When a two-faced smuggler helps her escape, her identity struggles continue. She dons multiple aliases to survive and help the Brotherhood launch a daring plan to destroy the satellite camps and oust the ruling Friend and Dome.

The theme of identity is one I hope will resonate with teens and adult readers alike. At some point, we all ask ourselves, “What defines me?” Is it our friends, an academic program, a relationship, or a job? While those things describe our day-to-day lives, they themselves shouldn’t define us. The source of our true identity must come from somewhere deeper. That’s the question Portia has to wrestle with, and one I hope readers will consider.

A Cup of Joe

Confession: One aspect of characterization I enjoy is giving my characters a small piece of myself. One of my early readers for book one, The Revisionary, remarked, “Let me guess. You like coffee.”

I laughed and replied, “How could you tell?”

Maybe lines like this one gave the fact away: “I start a pot of coffee. At least the aroma makes life smell better” (Portia, The Revisionary).

In book two, I incorporate the memory-association of coffee for Portia as she thinks back to simpler times (like dorm life with Lydia). Coffee also serves as a catalyst for an important scene where Portia, in disguise, serves her enemies and in turn learns of their disturbing plans for the satellites.

What about you? Are you a coffee drinker? If you are, I hope you’ll enjoy a giveaway opportunity for a Starbucks gift card. After all, coffee does make life smell better.

A Sprinkle of History

Two summers ago, my brother and I had the opportunity to visit the North Bridge in Concord, Massachusetts. It’s the historical site for the “shot heard round the world” that ignited the American Revolution.

In book two, Portia and the Brotherhood launch their own threadbare revolution. Though the odds are against them, they’re determined to stop the abuses by those in power.

My own visit to this famous site helped inspire Portia’s journey of discovery and the Brotherhood’s fictional parallels to the American Revolutionary War. Writing the scene where she rediscovers this birthplace of liberty was one of my favorites, because I walked the North Bridge and poured over books researching what happened that fateful day. I hope the scene comes alive for my readers and quickens their interest in history and its relevance for us today.

3 Comments on “Revolutionary: Can She find Hope, Identity & Freedom?”

Kindle Unlimited is having a deal!

This is a great way to ‘borrow’ and binge your favorite Christian Fiction Authors!