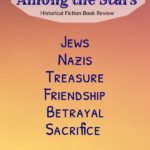 I love historical fiction. It opens up new experiences. For example, in today’s book, Hidden Among the Stars, where we meet the Jews in Austria before World War II. Such a tough time in history, that was.

Normal everyday people got caught in the chaos of the war. On both sides.

The Jews were definitely targeted harder than most, as our enemy the devil has it out for God’s chosen people.

Contents hide
1 The History of the Jews in Austria Before WWII
2 About the Book
2.1 In the Past
2.2 In the Present
3 Hidden Among the Stars ~ Libraryan Thoughts
3.1 Fathers
3.2 Related Posts:

I have not studied much about Austria, aside from my mom’s favorite movie, The Sound of Music. (Yes, I realize that great liberties were taken, and it’s nothing like the true story, but it’s still fun!)

Her favorite part is when the two Sisters say:

“I have sinned, Reverend Mother” “I Too”

after sabotaging the Nazis cars in front of the convent.

While it does not talk about the Jews in Austria, the Sound of Music does give a small taste of life in Austria before WWII.

That’s one thing that I love about fiction. Fiction and museums bring history to life. But fiction is so accessible!

The History of the Jews in Austria Before WWII

In doing some research, I learned some cool things about the Jews in Austria before WWII.

Book Title: Hidden Among The Stars

Genre: Historical Fiction (However, this is a time-slip novel, so there is also a contemporary component to the story)

From the award-winning author of Catching the Wind, which Publishers Weekly called “unforgettable” and a “must-read,” comes another gripping time-slip novel about hidden treasure, a castle, and ordinary people who resisted evil in their own extraordinary way.

The year is 1938, and as Hitler’s troops sweep into Vienna, Austrian Max Dornbach promises to help his Jewish friends hide their most valuable possessions from the Nazis, smuggling them to his family’s summer estate near the picturesque village of Hallstatt. He enlists the help of Annika Knopf, his childhood friend and the caretaker’s daughter, who is eager to help the man she’s loved her entire life. But when Max also brings Luzia Weiss, a young Jewish woman, to hide at the castle, it complicates Annika’s feelings and puts their entire plan—even their very lives—in jeopardy. Especially when the Nazis come to scour the estate and find both Luzia and the treasure gone.

Eighty years later, Callie Randall is mostly content with her quiet life, running a bookstore with her sister and reaching out into the world through her blog. Then she finds a cryptic list in an old edition of Bambi that connects her to Annika’s story . . . and maybe to the long-buried story of a dear friend. As she digs into the past, Callie must risk venturing outside the safe world she’s built for a chance at answers, adventure, and maybe even new love.

Hidden Among the Stars ~ Libraryan Thoughts

A well researched and beautifully written story of both the Gentiles and the Jews in Austria, Hidden Among the Stars gets 5 stars in my book.

While it is not exactly Time Travel, the time-slip in this book was fun! Getting pieces of both stories, these Austrians, both the ancestral Austrians and the Diaspora Jews in Austria, and Callie’s 21st Century story was great!

I really connected to Callie, the contemporary lead. I too feel safest tucked away with my books and when I get to share books I love with others. {in case you wondered why I blog} I think we share the same superpower. “Story Girl” is a title I could really get into!

And despite how she got here name, Callisandra is absolutely beautiful! Her courage made me want to be more courageous, and her book choices made my wishlist grow again!

There are several fathers in this book, at least 3 of them make you mad, and 2 of them stand out as men of honor, who care for and take care of their families well. Even with impossible odds, Dr. Weiss did what he could. I admired him throughout his story. He was a remarkable man.

Part of the ending, I expected from about chapter 2-3, which is about when I was sucked in and couldn’t put the book down. But another part surprised me, and I was very impressed. I enjoyed being surprised!

The premise of Hidden Treasures belonging to the Jews in Austria who could not take their wealth with them when they were escaping was sweet and sad. How it was cared for, as well as how easy it might be for that knowledge to be lost was well written and believable.

I would recommend this book to anyone 16+ with the caution that:

A) there is some forceful unwelcome attention that does result in pregnancy, and

B) this deals with the treatment of the Jews in Austria leading up to the war, so it will be uncomfortable. That said, the real history is uncomfortable, and we dare not forget or pretend that it wasn’t!

Melanie Dobson does a fantastic job of making it real without being graphic. I hope you will read it!

Hidden Among the Stars is a must-read, a tale of Jews in Austria before WWII, of Honor and Sacrifice and Hidden Treasure. Also a contemporary Story Girl on a quest for truth

4 Comments on “The Hidden Treasure of Jews in Austria”