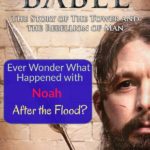 Have you ever considered much about Noah after the Flood? That Noah might have still been alive during the events of the Tower of Babel timeline? I can’t say that I’ve ever put those two things together, myself.

I found this week’s book intriguing for that reason. In my mind, Noah ends at Genesis chapter 9, and I never calculated how many years later the Tower of Babel timeline fit in.

The two genealogies in 9 & 11, while they give context and important information, break the flow of the story enough to confuse a casual reader (me)!

I did receive a copy of this book from Celebrate Lit, and choose to review it here. All thoughts are my own.

Babel: The Life of Noah After the Flood

A sweeping, epic retelling of the story of the Tower of Babel. . .

More than a century after the worldwide flood, Noah, now the forefather of the living world, works peacefully in his vineyard until tragedy tears apart his relationship with his son, Ham.

Years later, dark prophetic dreams inextricably link him with a young man carrying scars from a painful past, and a young woman who longs for acceptance yet harbor secrets darker than either of them imagine.

Will Noah face the role he played in the slow unraveling of his family? Or will everything collapse when they meet the evil attempting to swallow the world at. . . the Tower of Babel?

You can read 10 Very Interesting Facts about the Tower of Babel at brennanmcpherson.com.

What I Think of This Tower of Babel Timeline

Babel, as a look at the life of Noah after the flood, was an interesting book. I’m still not quite sure what I think of it. I found it believable, plausible, challenging and heroic. It had all the elements of a good story. Family drama, good vs evil, chivalry, betrayal to name a few solid elements. And it started me off doing some research, which is what really makes good Biblical Fiction Authors stand out.

But, at the same time, I struggled to feel invested in the story. I felt like an outsider, not really part of the story. It might just be that I was sleep deprived (thank you, son), or something else unrelated to the story. I can’t say for sure.

Honestly, I hadn’t given the Tower of Babel timeline a whole lot of thought. I knew it happened after the flood and before Abram started his journey. Though several hundred years have passed for Noah after the flood, he lived long enough to witness the whole fiasco of the Tower. And possibly met Abram.

After reading Babel, I went back to my Bible and read Genesis 9-11. And wondered how I had missed the Genesis 9 genealogy notes referring to people grouped by languages. Or never took the time to add the years up in the Genesis 11 genealogy.

Which begs the question, what happened to Noah after the flood? Where did he go wrong as a father/grandfather? Oh wait, He’s no more perfect than the rest of us. He was Righteous, which means he honored God. But He was just as failable as you and me.

Good Christian fatherhood (or motherhood) is not a guarantee of good Christian descendants for generations to come. It does, however, show our love for God, and for our children, when we obey and give it our best efforts and prayers!

What Do You Think about Babel- and Noah After the Flood?

I hope you’re thinking and doing your own study of Genesis right about now. There’s so much more than just the Big Stories. The genealogies matter. They frame, and give perspective. Noah After the Flood is just as significant as Noah and the Ark!

2 Comments on “Babel: 1 Man’s Imagining of Noah After the Flood”