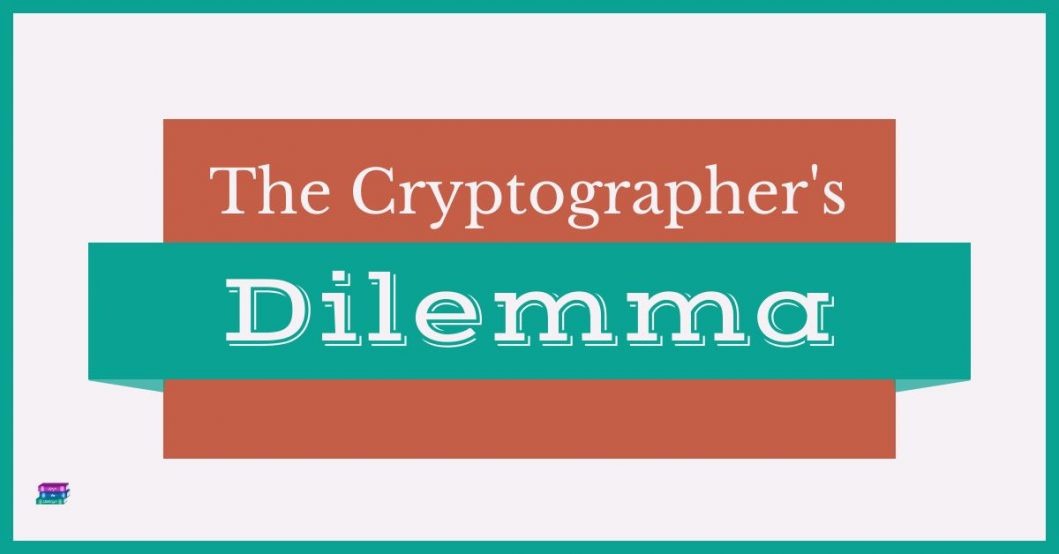 The Cryptographer’s Dilemma is actually a collection of dilemmas, I would say. She’s got the actual decryption dilemma on the case she’s been assigned, then there’s her Philip dilemma, and a family dilemma as well. And the way they all fit together is a tribute to the author’s skills.

And the giveaway for this one is a tribute to the author’s generosity 🙂 Make sure you comment below and enter the giveaway because there’s a good chance you could win!

Full of intrigue, adventure, and romance, this new series celebrates the unsung heroes—the heroines of WWII.

FBI cryptographer Eloise Marshall is grieving the death of her brother, who died during the attack on Pearl Harbor, when she is assigned to investigate a seemingly innocent letter about dolls. Agent Phillip Clayton is ready to enlist and head oversees when asked to work one more FBI job. A case of coded defense coordinates related to dolls should be easy, but not so when the Japanese Consulate gets involved, hearts get entangled, and Phillip goes missing. Can Eloise risk loving and losing again?

Solving a mystery is one of my favorite activities, so ‘helping’ Eloise decode the clues was fun. Especially as it’s based on a true story!

I felt a connection to the emotional roller coaster she was on, right there with her as she grappled with both Philip and her family stresses.

The transition from wanting to knock the chip off Philip’s shoulder to wanting his approval to wanting his heart was well done. Not rushed, even if the whole story takes less than a month.

Philip is a great guy whose dream of being a pilot was crushed before it ever had a chance. But he’s a Good detective, and determined. And given half a chance, his heart shines through in great ways!

There’s enough of the story wrapped up to be fully satisfying, and yet a couple of things are not completely tied up to either leave room for a sequel or satisfy realists who know that we do not always have the answers we want.

I received a copy of the book from #celebratelit and @netgalley and chose to review it here. All thoughts are my own.

Johnnie Alexander creates characters you want to meet and imagines stories you won’t forget in a variety of genres. An award-winning, best-selling novelist, she serves on the executive boards of Serious Writer, Inc. and the Mid-South Christian Writers Conference, co-hosts Writers Chat, and interviews other inspirational authors for Novelists Unwind. Johnnie lives in Oklahoma with Griff, her happy-go-lucky collie, and Rugby, her raccoon-treeing papillon. Connect with her at www.johnnie-alexander.com and other social media sites via https://linktr.ee/johnniealexndr.

Not all secret messages involve substitution codes where random letters and numbers replace the original letters and numbers. Velvalee Dickinson, a doll collector who owned a doll shop on Madison Avenue in New York City, used jargon code to pass along information to the Japanese about the U.S. ships that had been damaged at Pearl Harbor.

Here’s an excerpt from one of the letters (as originally written):

The only new dolls I have are THREE LOVELY IRISH dolls. One of these three dolls is an old Fisherman with a Net over his back—another is an old woman with wood on her back and the third is a little boy….I can only think of our sick boy these days. You wrote me that you had sent a letter to Mr. Shaw, well I want to see MR. SHAW he distroyed Your letter, you know he has been Ill. His car was damaged but is being repaired now. I saw a few of his family about. They all say Mr. Shaw will be back to work soon.

Velvalee, who the FBI nicknamed The Doll Woman, wrote this letter on her Underwood typewriter. She used the return address and forged the signature of one of her regular customers, Mary Wallace of Springfield, Ohio. Then Velvalee mailed the letter to an address in Buenos Aires, Argentina.

Unknown to Velvalee, the Japanese had abandoned the Buenos Aires address as a drop point. The letter was marked “return to sender.” When Mrs. Wallace received it, she turned it in to the Post Office Director in Springfield who passed it along to the FBI.

Cryptographers determined that the letter was written in jargon code. To the casual reader, the letter is about dolls. But the intended recipient would have understood it’s about much more than that.

In this example, only one of five letters given to the FBI between February and August of 1942,

cryptographers decoded the message as follows:

Cryptographers believed that the words Mr. Shaw and Your were purposely capitalized and that the word distroyed was purposely misspelled to draw attention to them. Mr. Shaw referred to the USS Shaw, a destroyer (distroy + your = destroyer).

The remainder of the letter says Mr. Shaw is ill but “will be back to work soon.”

The ship was in dry dock at Pearl Harbor when the Japanese attacked. As the heroine in The Cryptographer’s Dilemma explains, “About two weeks before this letter was written, it [the USS Shaw] was undergoing repairs in San Francisco.”

In the novel, Eloise Marshall is a naval cryptographer who teams up with FBI agent Phillip Clayton, to find the person responsible for forging the signatures on the letters. Their search takes them from Washington, DC to the Springfield, Ohio, to the west coast and back again. On their journey, Eloise will confront an unexpected specter from her past and Phillip will risk his life to save hers.

4 Comments on “The Cryptographer’s Dilemma: A Historical Puzzle”

The latest Christian fiction mailed directly to your door every month.

This affordable $10 box is sure to be fun!