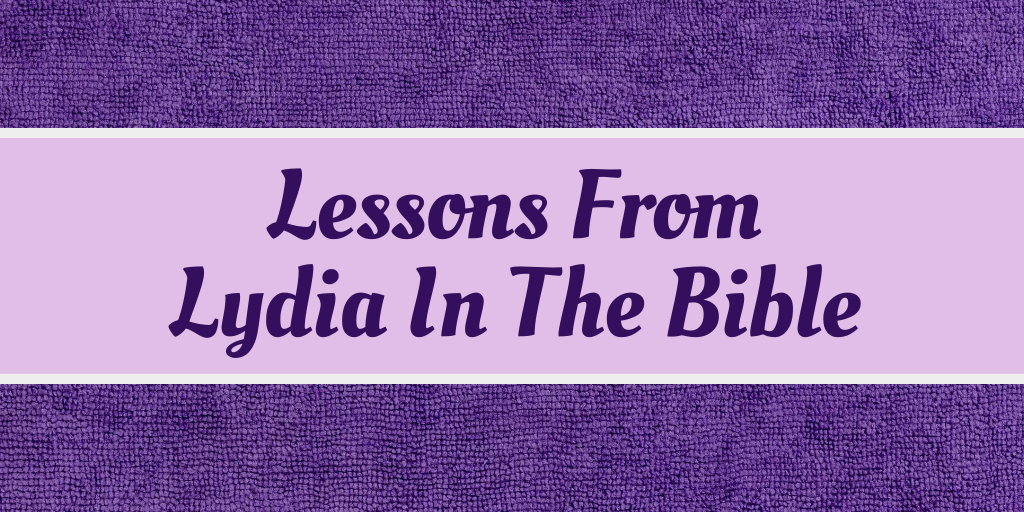 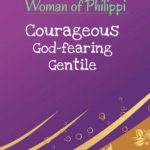 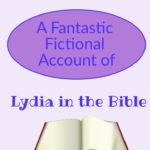 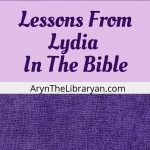 I absolutely love the story of Lydia in the Bible! The way God directed Paul, taking him somewhere he hadn’t even considered going, in order to reach Lydia, seller of purple, the God-fearing woman who had resources, and a generous spirit.

Through her, the church at Philippi was given a home, and her life was never the same again!

First, the setup: Paul’s mission was to serve God and spread the Gospel to the Gentiles*. He had to be able to listen when God gave directions though, because for whatever reason, the people where Paul wanted to go weren’t ready. But God knew there were a few people in Macedonia who were. Starting with Phillipi.

Paul’s Vision of the Man of Macedonia

6 Paul and his companions traveled throughout the region of Phrygia and Galatia, having been kept by the Holy Spirit from preaching the word in the province of Asia. 7 When they came to the border of Mysia, they tried to enter Bithynia, but the Spirit of Jesus would not allow them to. 8 So they passed by Mysia and went down to Troas. 9 During the night Paul had a vision of a man of Macedonia standing and begging him, “Come over to Macedonia and help us.” 10 After Paul had seen the vision, we got ready at once to leave for Macedonia, concluding that God had called us to preach the gospel to them.

11 From Troas we put out to sea and sailed straight for Samothrace, and the next day we went on to Neapolis. 12 From there we traveled to Philippi, a Roman colony and the leading city of that district of Macedonia. And we stayed there several days.

13 On the Sabbath we went outside the city gate to the river, where we expected to find a place of prayer. We sat down and began to speak to the women who had gathered there. 14 One of those listening was a woman from the city of Thyatira named Lydia, a dealer in purple cloth. She was a worshiper of God. The Lord opened her heart to respond to Paul’s message. 15 When she and the members of her household were baptized, she invited us to her home. “If you consider me a believer in the Lord,” she said, “come and stay at my house.” And she persuaded us.

6 Lessons from Lydia in the Bible

In response to God’s prompting, Paul went to Phillipi, and to the spot by the river where the few Jews in the area worshiped God.

God had also drawn Lydia to himself, my guess is because one of the Jewish women had been kind to her. Kindness goes a long way, doesn’t it?

But when these two met, God moved. He opened Lydia’s heart, and showed her the Truth.

Things We Can Learn from Paul and Lydia in Acts 16

These characteristics of Lydia in the Bible are ones that should encourage and challenge us. If she could, we can learn to!

The Real Story of Lydia in the Bible

The more time I spend reading quality Biblical fiction authors, the more I start wondering about what happened before, or after that little 2-minute scene we get to see. Who were these people? What drove them? Personalities?

As a Biblical Character Lydia gives hope, and her courage to step outside of the “social norms” of her day is inspiring!

Smart, strong, and a follower of the Jewish God, Lydia has nonetheless quietly conformed to the expectations of the wealthy Roman society into which she was born. Her father marries her off at age fifteen to a much older man whom she dislikes. Despite an unpleasant wedding and a marriage that doesn’t improve with age, Lydia remains a dutiful and faithful wife. When her husband is killed, years later, Lydia vows to remain single and returns to her father’s house in Thyatira with her twelve-year-old daughter.

There, a new life begins to emerge as she is trained in the family dye business. Lydia displays an aptitude for trade in the male-dominated world of first-century commerce. Her brother, who had chosen service in the Roman army rather than work in his father’s business, is at odds with his sister. Jealous of her quiet success as she learns the dye business, he’s especially befuddled by what he considers to be Lydia’s obsession with the Jewish religion. When their father dies, Cassius inherits the family’s home; Lydia inherits the business, and unbeknownst to her brother, a small villa in the city of Philippi.

Lydia flees with her mother and daughter to Philippi where she sets up shop. At the mercy of a patriarchal society, Lydia needs a man to serve as the public face for her business. She discovers the right person in the handsome face of Greek man she’d hired — an employee with whom she develops a close friendship. The plot thickens as Lydia meets a strange man named Paul the apostle who is stirring up crowds in town. When Lydia’s brother shows up in Philippi, determined to force her to sell the business, he discovers plenty of fuel to accomplish his goals.

My Review of Lydia, Woman of Philippi

In Lydia, Woman of Philippi, we meet a young woman watching generational sin getting its’ way. Dealing with difficult circumstances, and still knowing that Adonai Is with her; Watching over her; Loves her. Growing stronger through adversity, by relying on the God of her mother’s people. Lydia has been a “God-Fearer” since childhood. I was encouraged by her handling of adversity, and confidence that God was with her, looking out for her. Providing needed assistance just at the right moment.

Cassius, the obnoxious and selfish little brother had far too much power, and overall, made a very good antagonist to the story. You were never really surprised by his behavior, but disappointed that he never seemed to ‘get’ it.

The way Diane does us the favor of mentioning the Psalm chapter references, so we can go look it up, and study God’s word for ourselves, is so kind, and unobtrusive.

Watching Lydia struggle with the whole “Class” issue, was fascinating. Concern for appearances, Fear of loss, etc, between gender class, and the superiority complex of the wealthy Romans vs any other class of citizens, reminds me of our current situation. Everyone thinking their category of humanity is more valuable than any other. Most of us know that we are all “One in Christ” but acting like it, that’s the hard part!

One of my absolute favorite parts was Paul’s tutorials. They get to have a Passover meal, and as it is mostly Gentile believers, Paul walks them through the meaning and significance of each step. This was AWESOME!

While not all of this story matches that of Lydia in the Bible, It’s very well done and believable! So little is said in Acts 16 Lydia doesn’t share her backstory, so Diane has creatively shared one possibility with us. Lydia in the bible is definitely a good role model for Christian Women!

You can purchase your copy here.

I recently finished enjoying one of Diane’s earlier books, Martha which connected some dots I had missed! I really like reading her Biblical fiction works.

Another fascinating version of the story of Lydia in Acts, is Bread of Angels by Tessa Afshar. The amazing thing is this story of Lydia is completely different than the one above, but still remains faithful and plausible, and totally relatable.

In Bread of Angels, Lydia is left orphaned and heir to a trumped-up scandal, causing her to flee to Philippi. A moment of generosity to a beggar leads to a lifelong friendship with a well-educated and faithful Jewess, who teaches her to be a God-fearer. This partnership buoys her through life’s hardships and prepares her for Paul’s arrival on the scene.

Honestly, this one is so beautifully written! It challenges the reader to trust God in the face of legitimate fears and lean on him instead of our own understanding.

I love the unlikely alliances that bolster Lydia at just the right moments, which remind us that God is working behind the scenes in ways we can’t even imagine!

Lydia in the Bible Inspires Me

While reading Lydia, Woman of Philippi, I was inspired/encouraged to rely on God in a deeper way. Watching Lydia read, pray, and trust, even when it was HARD, was so neat. You aren’t left with the feeling of an impossible standard, because you see her struggle, sometimes for years, to come to a point of putting into action something she knows is right. Instead, you see a role model, flawed, but persistent.

It was an enjoyable read, easy to get into, and memorable. I really hope you’ll give it a chance. I’ve already read it twice, and will probably try to read it again close to Easter. (Can you tell I really liked the Passover / Last Supper Section?) Lydia in the Bible is Real. Lydia, Woman of Philippi, is a plausible representation, and a lot of fun!

2 Comments on “Lydia in the Bible: 6 Lessons We Still Need”