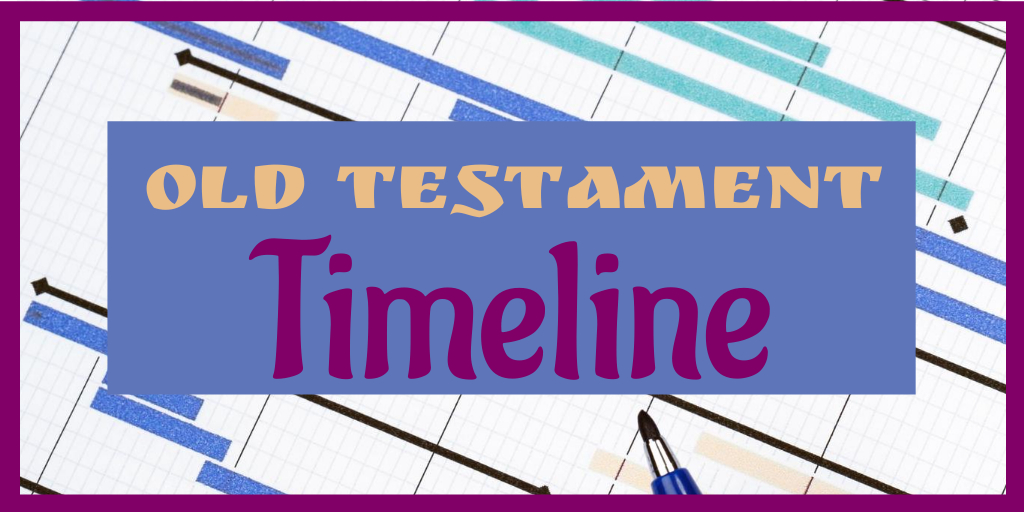 To enhance your experience with studying the Bible, try picking selections from this Chronology of the Bible Timeline-Old Testament Timeline Edition. You’ll find loads of Christian books and Bible studies, plus the best Biblical Fiction novels.

Chronology of The Bible

The Bible isn’t exactly put together Chronologically, which can make things kind of confusing. But I’m hoping that this Chronology of the Bible will help build a clear framework in your mind.

Obviously, reading the Bible is the priority, and BlueLetterBible has a 2 page pdf Chronological Bible reading plan, that really helps navigate the ins and outs of what happened when, sorting out Psalms and Prophets in the midst of Kings and Chronicles. That is a particularly tricky bit, if you have a regular Bible and are reading cover to cover.

HOWEVER, There’s something special about reading a book series like the Restoration Chronicles, and realizing vividly that Ezra was alive and well and experiencing what was happening in the book of Esther, in real-time, outside of Susa. I’ve learned much from reading Biblical fiction.

Some of the Old Testament Timeline is a little hard to follow, especially once you get into the kings and prophets. So this Bible Chronology should help untangle it at least a little.

These days there are a number of good Bible studies and Biblical fiction books to choose from, so here are my favorites to fill in your Bible history timeline.

Keep in mind that Biblical fiction is just that, fiction, and is meant to draw you back to the Bible. Any inconsistencies or errors are because they are inspired by, but not copies of the true accounts.

A useful accompaniment to any read-through of the Bible would be Warren Wiersbe’s With The Word Chapter by Chapter Handbook. With over 1500 pages, it’s very comprehensive, but it is also accessible, with key points and details that you might otherwise miss. (And it’s available on Kindle!)

Bible chronology from creation and the fall to Noah, the flood, and the Tower of Babel: a fascinating point in time, but not where I want to live!

For an in-depth yet accessible commentary on everything from Creation to Babel, check out Ken Hamm’s latest release, based on decades of Answers in Genesis research.

And a great chapter-by-chapter devotional journal for the book of Genesis, for kids and adults, makes a wonderful accompaniment to these first few sections!

This Genesis Journal has 18 weeks of study to help you HEAR what God is saying through the 50 chapters of Genesis!

Noah’s Times and the Tower of Babel:

Timeline of Bible History of the Patriarchs

Bible Timeline from Abraham through Joseph and his brothers settling in Egypt: there are so many good Christian books that fit into this time period!

This is a real turning point when you consider that Abraham was not raised in a God-fearing home. At least not one that cared about the one true God.

Bible History Timeline: The Exodus through the Judges

The cycle of apostasy is strong in this part of the Bible history timeline, and yes, I have the pirate’s song from What’s in the Bible stuck in my head.

From Moses to Samuel there’s a lot of ground to cover here. And some wonderful stories! I may have grown up with Charlton Heston’s 10 Comandments movie every year. It wasn’t exactly Biblically accurate, but was still a great movie. These books on the Bible history timeline, however, are way better!

Don’t Forget to Read Your Bible:

Try out this awesome 15-Minute Bible Reading Plan: Read through the Bible more than once, in this unconventional but practical order. There is optional daily space to record what you’re learning. Bonuses include synopsis pages you can fill in yourself, sermon notes pages, and more! use code savehalf to get 50% off!

The Bible chronology with which kings and prophets go together can be difficult to follow. These Bible Fiction stories will help you to make personal connections between them.

Bible Timeline for the Kings and Prophets

What’s on Your Bible Timeline?

This is by no means an exhaustive list on the Old Testament timeline of Bible history. Just a highlights reel of books and Bible studies I’ve enjoyed or been curious about.

Which one is your favorite? And did I miss it? Maybe I’ve never heard about it. Please do and another to my neverending TBR!!!

Pin it for Later!

Kindle Unlimited is having a deal!

This is a great way to ‘borrow’ and binge your favorite Christian Fiction Authors!