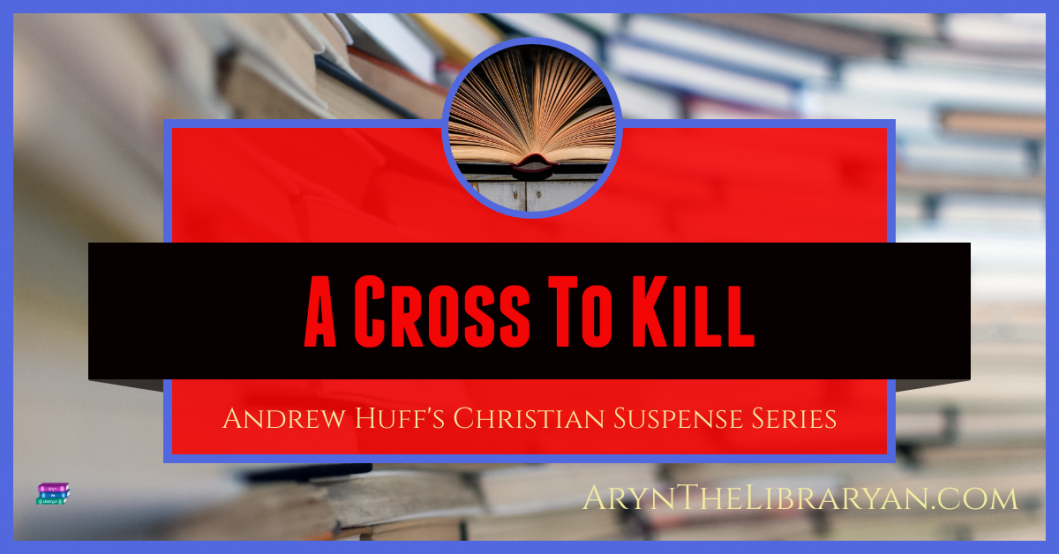 Happy Summer!! Of the many things I am thankful for, one is the opportunity to read amazing books, and Andrew Huff’s books, A Cross to Kill, and now Cross Shadow, do NOT disappoint. It’s a memorable and exciting series, and totally hilarious!

A Cross to Kill challenged me, made me shake my head a few times, and had me laughing out loud more than once. It takes a really good author to manage all that and leave you counting down the days until the sequel comes out. Andrew Huff managed this very well!

And now the second book is here. Cross Shadow grabs you from the opening scene, and keeps your focus all the way through.

I’m excited to share the Read with Audra Book tours. Hang onto your hat, because here we go!

This series by Andrew Huff takes you on a wild ride. As a church secretary, there was more than one scene I pictured some familiar faces filling key roles. It was fun, and creative.

About A Cross to Kill:

John Cross is a small-town pastor, bent on leading his flock to follow God’s calling. He’s not the sort of man one would expect to have a checkered past.

But the truth is that the man behind the pulpit preaching to his sheep was once a wolf–an assassin for the CIA. When John decided to follow Christ, he put that work behind him, determined to pay penance for all the lives he took. He vowed never to kill again.

Now someone wants the peaceful pastor to pay for his sins with his own life. And when a terrorist out for revenge walks into the church, John’s secrets are laid bare. Confronted with his past, he must face his demons and discover whether a man can truly change. Can he keep his vow–even when the people he loves are in mortal danger? Will his congregation and the brave woman he’s learning to care for be caught in the crossfire? In the end, his death may be the only sacrifice he has left to offer . . .

Andrew Huff’s thrilling debut is not only a riveting story of suspense, it’s also a deep exploration of the moral quandaries that face those who choose to follow the Prince of Peace in a violent world.

Read an excerpt from Kregel by clicking here.

My Thoughts on A Cross to Kill

A Cross to Kill by Andrew Huff is hilarious! I couldn’t put it down, and my family looked at me funny more than usual because I was laughing so often.

There’s plenty of action too. In fact my favorite scene is a high speed car chase with plenty of detail. Of course, Pastor John is juggling that with a phone call from one of the older church ladies who needs to talk to him. It’s the best scene in the book, which is saying something, because there are many really great scenes.

John is struggling to reconcile his CIA life with his new faith. Like any good battle-ready journey of integrating faith and work does, this book reminds me of Sergeant York. (at least a little)

And Christine was very impressive. As much as her life is nothing like mine, I still found myself relating to her and cheering her on. And the tease for the sequel, well let me just say that I can hardly wait!!

Cross Shadow: About the Book

All journalist Christine Lewis wants is the truth. All pastor John Cross wants is to avoid it.

Former CIA agent turned evangelical pastor John Cross is busy caring for the small community of believers he ministers to in Virginia. Journalist Christine Lewis is busy with the demand for her talents from top news agencies in New York City. Neither has any time left for their relationship, which began eight months before when they paired up to prevent the detonation of a chemical bomb in the nation’s capital.

But when Christine hears that her stepbrother has been arrested for murder in Texas, they team up again to discover the truth about the crime. Untangling a web of conspiracy, the couple finds themselves in the center of another dangerous situation-and in trouble far deeper than they expected.

With an assassin on the loose, a trusted colleague acting as a double agent, and unreliable artificial intelligence connected to mercenaries who have Cross on their hit list, these two may not get out of the Lone Star State alive.

My Thoughts on Cross Shadow

Andrew Huff did it again. Cross Shadow is equal to A Cross to Kill. I didn’t know if he could reach that same level a second time, but he did. The action sequences and complex intrigue of the plot keep you glued to the page.

The character development continues on solid ground. John and Christine are in an awkward phase of their relationship. They trust each other, and know they can count on each other. But they frustrate each other too. No longer the ‘crisis romance’ of the first book, more the ‘how does this work in regular life?’ phase.

The Sci-fi tech being used and developed was something I thoroughly enjoyed. What can I say, I grew up on Star Trek, Star Wars, etc, and my current favorite Sci-fi show is Eureka!

Thank You Andrew Huff for another fun day!

Andrew Huff ~ About the Author:

He is a two-time finalist in the American Christian Fiction Writers (ACFW) Genesis Contest for unpublished authors (2014 & 2017) and also won the Best Screenplay award at the 2015 48 Hour Film Festival in Richmond, VA.

Huff holds a Bachelor of Science in Religion degree from Liberty University and a Master of Arts in Christian Education from Dallas Theological Seminary. He resides in Plano, TX with his beautiful wife, Jae, and their two boys.

Learn more Andrew Huff and the Shepherd Suspense Novels at www.andrewhuffbooks.com. He can also be found on Facebook (@huffwrites) and Twitter (@andrewjohnhuff).

Is Andrew Huff Really That Good a Writer?

In a word, YES!! Andrew Huff’s books take you through the gamut of emotions, experiences, and possibilities.

I really hope you’ll pick up a copy of these books, or ask your local library to purchase them! It’s well worth the investment!!!

Suzanne Woods Fisher has written an amazing story of a few people who care enough about their neighbors to create a moonlight school to teach the adults who never had the opportunity to learn to read. Completely changes the community!

We use cookies to ensure that we give you the best experience on our website. If you continue to use this site we will assume that you are happy with it. If you choose not to accept cookies, please be aware that some portions of this site may not work as anticipated.I AcceptNo ThanksRead more
You can revoke your consent any time using the Revoke consent button.Revoke Cookies